David Cameron promises to back the curry industry 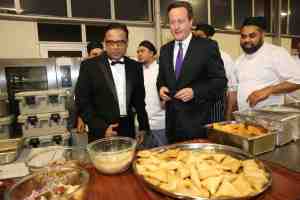 The £3.6bn curry industry in the UK is facing an acute shortage of South Asian chefs due to strict immigration rules for non-EU nationals.

The Home Office has set a minimum requirement of that all Indian immigrants must be able to speak English, be educated at NVQ level four with five years work experience at a post graduate level and be paid a minimum salary of £28,260 which most curry houses cannot afford to pay.

According to the immigration policy, locals are being trained to work in curry houses but it is not easy for those donning the apron. Most EU workers are reluctant to work in Indian restaurants, as they are unable to understand the basics of Indian cuisine and spices.

The government has been floating the idea of starting curry colleges to train local workers to work in the curry industry in a move to fix the shortage.

According to Spice Business, there are 10,000 curry restaurants in the UK that employ about 80,000 people.

This has led to a large gap in the kitchen where the demand for skilled curry chefs has increased but the supply is dwindling.

British Prime Minister David Cameron promised to back the curry industry at the British Curry Awards ceremony in London.

“Let me promise you this. We will work through this together. We will continue to help you get the skilled Asian chefs that you need. And we will also work with you to train up the next generation of home grown chefs,” said Cameron.

The British Curry Awards also known as the Curry Oscars was started in 2005 by British entrepreneur and restauranter Eman Ali. He has been promoting the British curry industry globally for the last 30 years.

“The British Curry has established itself as an international cuisine in its own right and a standalone culinary genre which has produced dishes such as the onion bhaji, the dhansak, the chicken tikka masala, the rogan josh, the chicken phall and the balti,” said Ali.

Scotland: In or Out?

Exactly a year from today, Scotland will hold a referendum to decide its independence from the United Kingdom.

The question to be asked at the referendum will be “Should Scotland be an independent country?”

An agreement was signed on 15 October 2012 by David Cameron, the British Prime Minister and Alex Salmond, the First Minister of Scotland. This agreement provides the legal framework for the referendum.

The referendum bill setting out the arrangements was put forward on 21 March 2013.

Who gets to vote?

Eligibility to vote will also include members of the armed forces serving overseas who are registered to vote in Scotland.

What happens after Scotland gets a “Yes” vote?

If Scotland gets a “Yes” vote, the Scottish “Independence Day” will be in March 2016 just before the start of the May 2016 Scottish election campaign. Scotland will get its own written constitution.

Scotland will retain cultural ties with the UK and will join the Commonwealth of Nations, the European Union and the NATO. The British monarch will be the ceremonial Head of State in Scotland as is the case with Australia, Canada and New Zealand.

Scotland will continue to retain the pound sterling currency.

The Scottish National Party objects to having nuclear weapons on Scottish territory. However, Scotland will inherit the naval base of Faslane in the Firth of Clyde and the Trident Nuclear Missile System at Coulport.

Opinion polls have indicated that Scotland would perform better economically as an independent state. The public spending in Scotland is higher than England but Scotland also produces higher tax revenue compared to the UK average mainly due to production of oil from the North Sea.

The research paper Scotland Analysis: Macroeconomic and fiscal performance states that Scotland’s economic performance is stronger because it forms a part of the UK.

If Scotland becomes independent, a proportion of the UK national debt will be inherited, thereby starting a new nation with existing debt.