Same sex couples say, “I do” 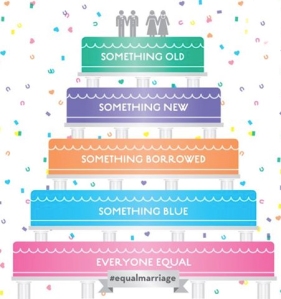 in England and Wales. Couples could register their intention from 13th March, 2014 onwards that legalises same-sex marriage starting 29th March, 2014.

Before, 29th March, same sex couples had the option of getting into a civil partnership that became legal in 2005 under the Civil Partnership Act 2004.

The first couples in England and Wales

Peter McGraith and David Cabreza spent 17 years together before being among the first same sex couple to tie the knot in London on the night of 29th March. The wedding took place at Islington Town Hall. Human Rights campaigner Peter Tatchell acted as the chief witness to the ceremony.

Also vying for the title of the first same sex couple to wed in Britain were Andrew Wale and Neil Allard from Brighton.

The first Asian same sex couple to get married were Subodh Rathod and Niranjan Kamatkar who got married at the Wood Green Civic Centre in North London. They streamed their ceremony live.

“This weekend is an important moment for our country,” said British PM David Cameron on the PinkNews website. The rainbow flag flew above Whitehall today.

“I am proud that we have made same sex marriage happen. I am delighted that the love two people have for each other – and the commitment they want to make – can now be recognised as equal. I have backed this reform because I believe in commitment, responsibility and family. I don’t want to see people’s love divided by law,” said Cameron in July last year.

Justin Welby, the Archbishop of Canterbury said the Church had accepted the new law and would continue to demonstrate “the love of Christ for every human being”. However, same-sex marriages are not currently taking place in the Church of England.

Northern Island currently does not intend to legalise same-sex marriages.