Vijay Kastoori, a of Andheri is the Director – Media Planning and Analysis for Situations Advertising and Marketing Services Pvt. Ltd. by day and controls traffic in Andheri by night. 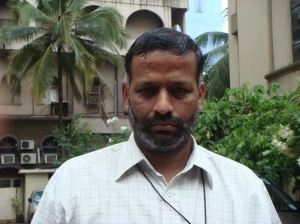 “It all happened one and a half years back when my neighbour had a fall and suffered a fracture. It took almost two hours for the ambulance to reach because of the traffic,” says Kastoori. From then, Kastoori began analysing the traffic patterns. He then bought a camera, clicked photographs and shot videos. “I then realised that the root cause of the traffic jams in the area is that people drive in wrong lanes hence blocking the smooth flow of traffic,” he adds.

Kastoori, armed with his photographs and videos, then began doing the rounds with officials of the Mumbai Traffic Police. “I met most of the officials to discuss the traffic problem and learnt the techniques of traffic control from them,” informs Kastoori.

Kastoori’s office which is located at Link Road, Andheri West, also witnesses frequent traffic jams. On his way back from office, either by the company bus or BEST bus, he alights from the bus and makes sure the traffic moves and then walks back home.

Kastoori controls the traffic every evening. His usual areas are the signals at Amboli naka, Andheri station and Andheri east – west flyover. He also stands at Andheri subway where there is no signal. According to Kastoori, the worst affected area is Andheri subway because if Andheri East is jammed then the flow of traffic from the west to the east is restricted. When that happens, motorists going to the east halt in the lane of motorists going straight on S. V. Road towards the station. Hence, the traffic continues even till Jogeshwari station.

“Whenever there is heavy traffic jam, I contact the traffic police and ask them to send a policeman. Within five minutes, a policeman comes and only then I move to another area where the traffic is held up,” says Kastoori. Kastoori cannot fine erring motorists as he is not authorised to do so. “Even the traffic police in this area do not always stop motorists unnecessarily because if he will end up spending almost five minutes on one motorist and in that much of time, the traffic goes haywire,” he informs.

Kastoori does not have a uniform but stands at the traffic junction armed with a whistle. “Initially I felt awkward when people used to stare at me and wonder who I was, what I was doing and with what authority I was controlling traffic but now I am use to it,” says Kastoori.

Controlling traffic is not an easy task especially when motorists are in a hurry and cut lanes. “I shout at some erring motorists but ultimately it is just a fraction of them who do not follow road discipline. Most of them are very cooperative and many appreciate the fact that at least somebody is doing something,” says Kastoori. “Now I have become a familiar face at traffic junctions so motorists listen to me and do not take me lightly anymore,” he adds.

2 responses to “Ad man by day, traffic controller by night”